POINT THAT “FLAVOR INJECTOR” AT SOMEBODY ELSE, MISTER 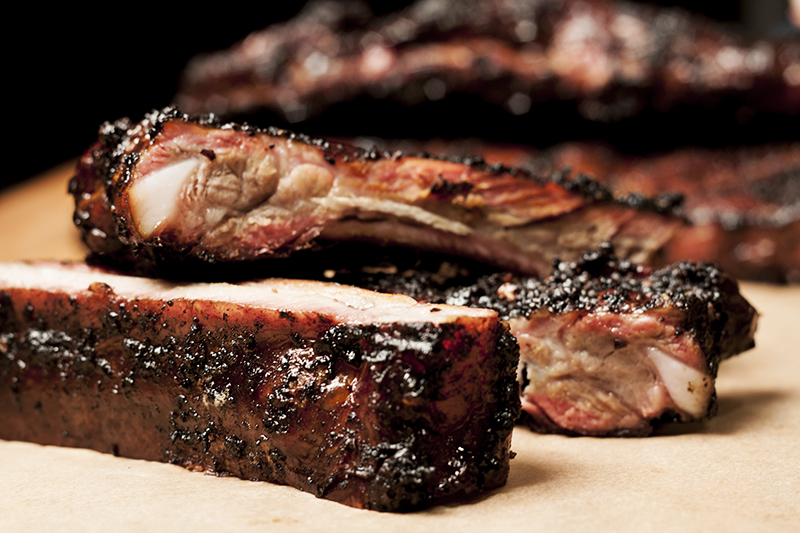 A lot of people fuck up ribs. There’s just no way around it. They’re either too sweet or too dry or too mushy or too gloppy or too… just fucked up. And for something that is so much a staple of so much barbecue, this really is a travesty.

In part, I blame competition style barbecue and all of it’s associated bullshit. As well as the new crop of barbecue oriented shows that basically feature a camera hour of fat hillbillies abusing meat with all sorts of marinade injectors, juice blend tenderizers, dog fuckers and other implements of pork torture. Now don’t get me wrong, I know plenty of fat hillbillies who can cook, but the networks seem all too fascinated by summertooths going Deliverance on anything that was once part of the pig.  If you see somebody fresh out of pecker camp with a tube of squeeze butter giving a short dissertation on their “flavor profiles,” chances are you’re going to find a cameraman nearby.

And that is a shame. 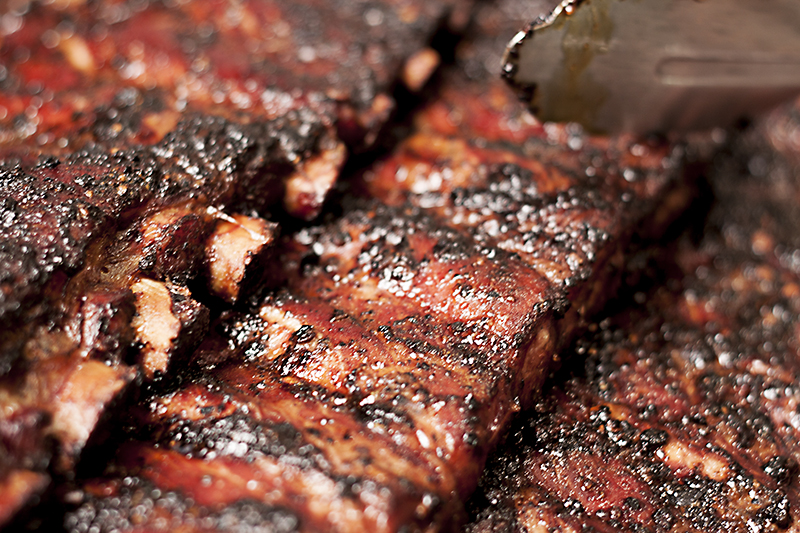 Because I like pork ribs. I really like them. Sure they’re a back seat driver to brisket and sausage in the Texas barbecue pantheon, but sitting back silently and watching them get abused would be like rushing out to buy a Toby Keith CD of Townes Van Zandt covers. Some things just aren’t right. And anyway, squeeze butter is not a “flavor profile” it’s a flavor, and that flavor is bullshit. Ribs should be respected along with the rest of the pig, so take your big metal pork violator and inject that apple juice somewhere else fella, no means no.

To my mind the key to any good barbecue is to accentuate the meat, not cover it up, and pork ribs are no exception. You want strong, clean pork flavor. You want appropriate seasoning. You want moisture, not glop, but moisture. You want clear evidence of smoke. You want meat that pulls cleanly from the bone but doesn’t fall off of it with barely a look. And personally, I want a distinct textural difference between the outside of the rib, and the meat within—think crispy edges with a tender but toothsome bite inside. And you get this by understanding meat and fire, which just requires a little patience and care. 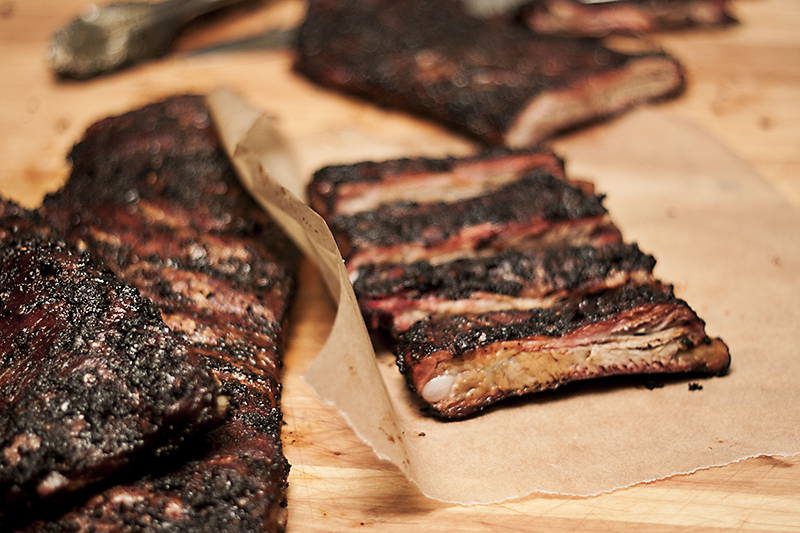 In light of this, I don’t like to foil my ribs. It braises the meat, which I think makes it a little too soft for barbecue. So to guarantee a moist product, I brine them overnight. This also has the benefit of seasoning the meat and bringing in some subtle flavor additions.

I also don’t like sauce. It’s just one of those things that I think detracts from good barbecue—I want meat and smoke, and sauce just gets in my way. For something as physically thin as ribs, I find a dry rub is just that, too dry. So instead I make a spice paste with plenty of oil in it. It protects the meat and also has the benefit of crisping nicely for better textural quality.

If you do all this and start with some quality pork from a good pig, you’re gonna have something to write home about. You might not get on TV with it, but the book is always better anyway. 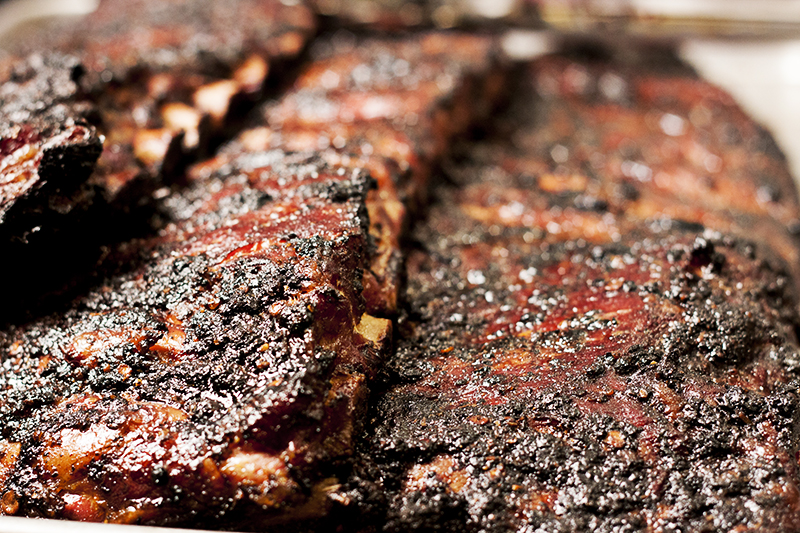 The great thing about pork ribs is that with a little bit of planning, you really only have about 1 hour of active cooking time and 5 hours in the smoker. Which makes them great for an easy weekend day of smoking if you want a leisurely dinner but don’t feel like getting up at 4am to make that happen. The shorter cooking time also makes them perfect for game day. You can throw them on late in the morning and have them ready by kick-off.

The night before smoking, brine your ribs. The following day, get your smoker going at about 225. Remove the ribs from the brine and pat dry with towels, removing any remaining spices that may be sticking to them. Using your hand or a basting brush spread the chili paste on both sides of the ribs. Cook over moist heat in your smoker for about 4-5 hours, until the bones just begin to peak through the edge of the meat. 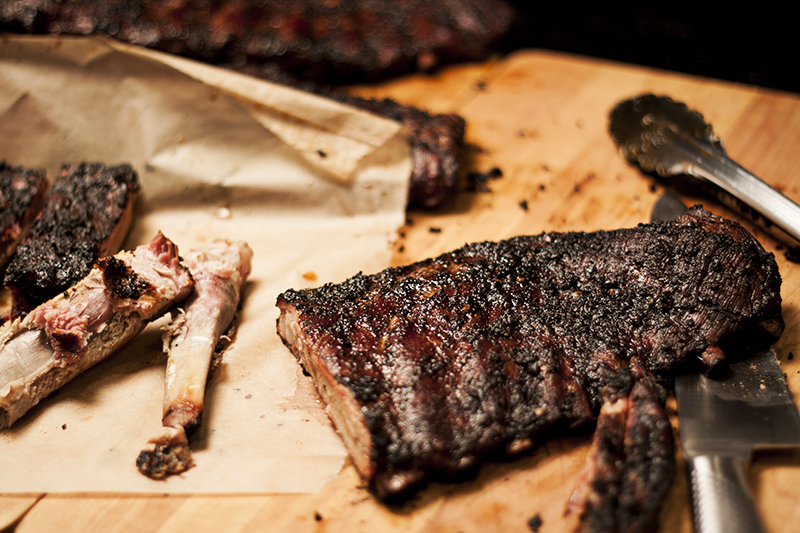 1 head of garlic, cut in half

Toast the juniper and coriander in a pan and then combine all ingredients in a pot large enough to hold the brine and eventually the meat. Bring to a boil. Remove from heat and chill thoroughly.

Whir the ingredients in a food processor, adding oil until it’s the consistency of a spreadable paste.

Preheat the oven to 400. In a pan, toast your cumin and coriander seeds and set aside. Put the chilis on a baking sheet and cook for about 10 minutes until they’re darkened, brittle and fragrant. Remove the stems and seeds. Crush the cumin and coriander in a mortar and pestal then whir the chilis and the crushed seeds in a food processor until they’re a powder. Store in a plastic bag or container